The Best Thing I Ever Ate 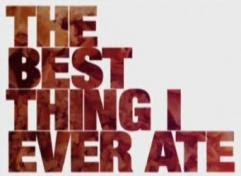 This is one of my favorite Food Network shows! I love hearing what other people like to eat and the different places that they've gone to eat at. I recently was able to go to one of the 50 best breakfast places in the 50 states voted by the Food Network. It was a great place with a fun atmosphere. The food was...okay. It wasn't the best thing I've ever had, but it wasn't bad. It got me thinking...what was the best thing I've ever eaten? Well, I have had some pretty great things...pizza is a favorite, and I like it when we make it from scratch and put fun toppings on it. Orange scones from Panera are amazing! Bean dip from a little Mexican restaurant in Steubenville, Oh, Oh and grilled toast from Spanky's in Steubenville...OM! That is one of the best things ever! I could go on and on about the great things I've eaten...but I want to touch on the BEST thing I have ever had! Jesus gave us His body and blood, a sacrifice for us, every time we participate in the celebration of the Mass. On the outside it looks like a little wafer of bread, pretty much tasteless and not much texture, but when I think about what I am consuming I am overwhelmed by the mystery of it all! In the gospel of John, Jesus says, and I quote: "Amen, amen I say to you, unless you eat the flesh of the Son of Man and drink his blood, you do not have life within. Whoever eats my flesh and drinks my blood has eternal life, and I will raise him on the last day. For my flesh is true food, and my blood is true drink. Whoever eats my flesh and drinks my blood remains in me and I in him." People LEAVE Him because of this, they say "nope, not doing it." Don't you think if Jesus had meant it was just a symbol of His flesh and blood, he would have called them back? Don't you think He would have said, "I didn't mean it like that"??? Instead He turns to His best friends and asks if they are going to leave Him to. He meant what He said! So then I think...if He really means it, then I need to pay attention...if we are what we eat...if we partake in the Eucharist on a weekly, or daily basis, we will become more like CHRIST! That is, by far, the Best Thing I Ever Ate...and I've eaten a lot of great things!
Email Post

9 Things Every Mom Should Have in Her Kitchen