and then I ate an entire gingerbread cake...

When I was pregnant with Gabriella let's just say that I gained more than the recommended amount of weight...I also retained a TON of water which was terrible.  Every time I went to the midwives they told me to 'slow down' on the weight gain.  This time around I told myself things would be different and I would work out religiously...however I wasn't factoring in the 'morning'/all day and all night sickness for the first 5 months and then I remembered that I have a toddler who is unpredictable and we had just moved in with my in-laws so Marty could go back to school to get his Google certification and their house is HUGE which means that Gabriella never stops. ever.  So by the time that I finished being 'sick' for 5 months...throw in a little stress with our living situation...I was a little less than motivated to go for a run.  But much to my surprise, I haven't gained as much weight so far as I thought I would have.  Maybe running around after said toddler has its benefits...also I suppose I don't have a Five Guys right down the road from me this time around...so that helps.
However I fully expected this week to be the week that the doctor told me to 'slow down' because...well...I ate an entire gingerbread cake by myself in about 5 days.  I made it thinking it would be a nice treat to have in the house.  Little did I know that Marty doesn't like gingerbread and low and behold neither does Gabriella.  So, being that there are only three people in the house...the burden fell to the one growing a child...and I accepted.  Though I really shouldn't have.  I walked into the doctor eyes closed to step on that scale and the nurse said 'oh wow' to which I cringed...but the words that followed made me think that my diet should probably just be gingerbread for the rest of the pregnancy.  One pound...really?????  I'll take it...though perhaps I shouldn't have celebrated that achievement by going to the Starry Night Bakery and buying two cupcakes...hey one was for Gabriella!
Anyway, I guess Gabriella found a way for me to burn more calories though...we pulled her wagon out of the barn and can I just say that pulling that wagon AND a 20lb Gabriella up a hill is a workout! 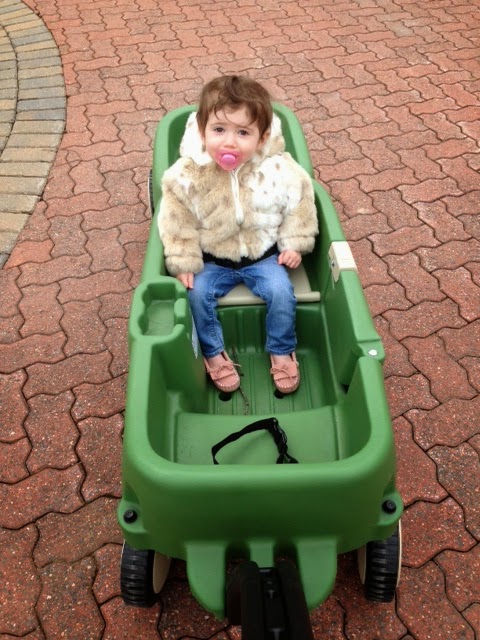 she really couldn't be much cuter...

Ever since we pulled the wagon out yesterday she won't play in the yard...she expects to be pulled everywhere...and she points at the leaves that she wants me to pick up for her to put in her wagon...yes, yes, I spoil her...however I like to think that maybe I am just getting more fit by submitting to her every whim.
On a more serious note...I am excited to say that Marty is getting ready to take the final test for his certification and I have to say that once he's passed it we will all breath a huge sigh of relief...9 weeks before the baby comes.  We had intended to be out of his parents house well before they returned from FL but life always seems to throw curveballs when we really just need a nice slow underhand tossed our way.  But God has been good keeping us on our knees and trusting in His plan.  We are so close to moving forward with the next chapter of our lives and I just keep reminding myself that God's plans are so much better than our own and that wherever He wants us is where we will end up.  I guess now I should start prepping for little boy Link...
But on that note...maybe I'll go make myself another gingerbread cake... 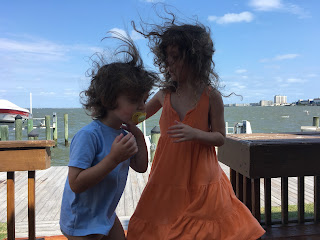